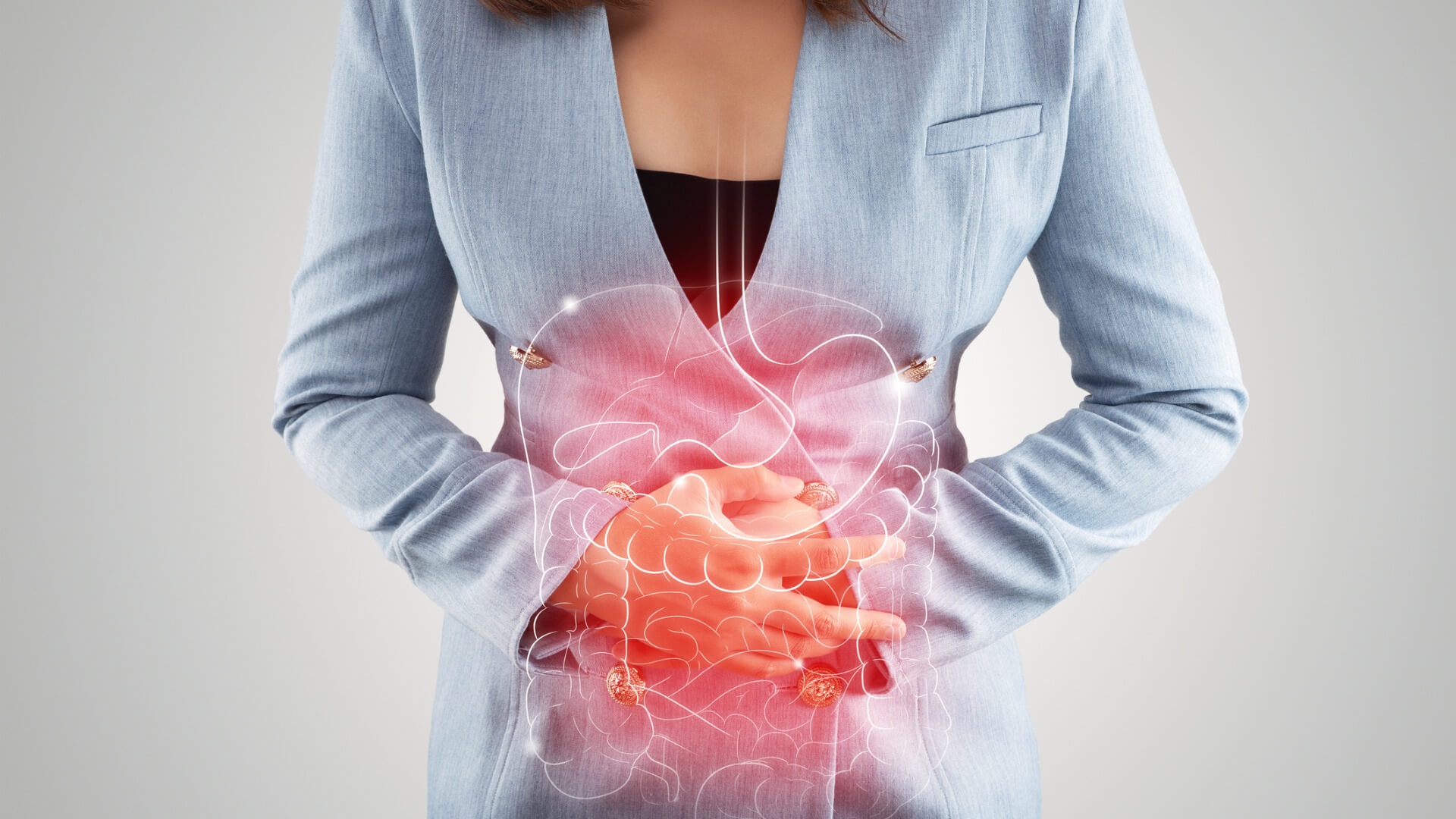 What is the intestinal epithelial barrier?

Lining the insides of our gut (or intestines) is a single layer of different types of cells, known as the intestinal epithelial barrier.

The main functions of this barrier are to prevent potentially harmful intestinal contents (e.g. bacteria, toxins, foreign bodies, indigestible components of food) from penetrating into the rest of the body, while still allowing important nutrients, water, and ions to be absorbed into the bloodstream.

There are various components of the intestinal epithelial barrier that allow it to perform both of these functions.

Specialised cells, known as goblet cells, secrete a layer of mucus – a thick, gel-like substance that traps and prevents large particles and bacteria from coming into contact with the intestinal lining and entering the body.

The intestinal epithelial cells themselves, which are tightly packed next to one another, also form a physical barrier against entry from bacteria and other pathogens.

But, how do nutrients, ions, and water get through this barrier?

Between adjacent cells are gaps or junctions, known as tight junctions, which contain various specialised proteins (e.g. occludins, claudins) that allow certain molecules (e.g. nutrients, ions, water) to pass through, but keep out bacteria and other larger particles. This pathway between intestinal epithelial cells is known as the ‘paracellular pathway’.

Alternatively, nutrients and other key molecules can be taken up from the lumen by epithelial cells and then transported through the cells, and eventually into the bloodstream. This is known as the ‘transcellular pathway’.

As another line of defence, we also have various immune cells (e.g. white blood cells) in a layer below the intestinal epithelial layer called the lamina propria. Immune cells in the lamina propria can trigger inflammation and other protective immune responses in the event that bacteria or other potentially harmful microorganisms manage to slip through the epithelial barrier.

Overall, then, immune cells in the intestine play a key role in the regulation of gut inflammation.

What happens when the function of the intestinal epithelial barrier is impaired?

As we’ve established in the previous section, the intestinal epithelial barrier prevents bacteria, toxins, and other potentially harmful organisms and substances from escaping out of the gut lumen and into the rest of the intestinal wall and then into the bloodstream.

The integrity of this barrier depends on several different factors, including how effectively epithelial cells are renewed, the types of bacteria and other organisms living in our gut (our gut microbiota composition), the types of foods we eat, and the function of our immune system.

If intestinal epithelial cells become damaged or dysfunctional, ‘gaps’ may form between them, compromising the physical barrier. Furthermore, the specialised proteins within the junctions between epithelial cells (e.g. occludins, claudins), which “decide” what molecules can pass through, may cease to function properly. This will then make the intestinal epithelial barrier more permeable, allowing bacteria and other harmful substances to penetrate.

Once these bacteria and other substances enter the lamina propria (the layer beneath the epithelial cells), they can activate immune cells and trigger inflammation. This is thought to occur in inflammatory bowel disease (IBD), such as ulcerative colitis and Crohn’s disease.

More specifically, in IBD, the activation of immune cells in the lamina propria is thought to trigger inflammation, which damages the intestinal epithelial barrier and makes it more permeable. This allows bacteria and other microorganisms in the gut lumen to pass through into the lamina propria, further activating immune cells and triggering further inflammation. This cycle then leads to an uncontrolled immune response that promotes chronic inflammation within the gut.

As well as our diet, gut microbiota composition, and immune system function, genetic factors can also affect the integrity of our intestinal epithelial barrier. One of the genes thought to play a role is PTPN2.

PTPN2 (protein tyrosine phosphatase non-receptor type 2) is an enzyme produced by immune cells that acts to maintain the integrity intestinal epithelial barrier, regulate the composition of our gut microbiota, and also regulate inflammation.

Highlighting the anti-inflammatory role of the PTPN2 enzyme, studies have shown that mice lacking PTPN2 develop uncontrolled inflammation in their small and large intestines and have a greater abundance of harmful bacteria in their gut.

What is the PTPN2 gene?

The PTPN2 enzyme is coded for by your PTPN2 gene.

Studies have shown that variants of this gene can affect the function of the PTPN2 enzyme. This, in turn, can affect susceptibility to gut inflammation and the risk of inflammatory bowel disease (IBD).

A SNP (Single Nucleotide Polymorphism), designated rs1893217, causes an A --> G change in the DNA sequence of the PTPN2 gene. This creates two different PTPN2 gene variants or ‘alleles’ – the ‘A’ allele and the ‘G’ allele.

The ‘G’ allele has been shown to code for a dysfunctional PTPN2 protein and is also linked to lower PTPN2 enzyme levels. As PTPN2 usually acts to maintain the integrity of the intestinal epithelial barrier and inhibit inflammation, it is thought that reduced PTPN2 activity and levels in ‘G’-allele carriers may make them more susceptible to gut inflammation.

On this note, ‘G’ allele carriers have also shown in genome-wide association studies (GWAS) to be more likely to have inflammatory bowel disease (IBD) compared to non-carriers.

Inflammatory bowel disease (IBD) is an umbrella term for two conditions, ulcerative colitis and Crohn’s disease, which are both characterised by chronic inflammation of the gut (gastrointestinal tract).

The exact causes of IBD are unclear, but it is thought to arise at least partly from dysregulation of the immune system and changes in gut microbiota composition that promote inflammation. Furthermore, genetics are thought to play a significant role, with first degree relatives of people with IBD found to have an 8-10 times risk of having IBD themselves.

In this respect, several studies have found an association between the ‘G’ allele (rs1893217) of the PTPN2 gene and an increased risk of IBD, in particular Crohn’s disease. For example, a 2013 meta-analysis, encompassing 17 studies that compared 18,308 cases with IBD to 20,406 controls, found that ‘G’ allele carriers had 1.45 times greater risk of Crohn’s disease compared to non-carriers. This is illustrated in the Forest plot below.

As mentioned in previous sections, there are biologically plausible reasons for why inheriting the ‘G’ allele of the PTPN2 gene might increase a person’s susceptibility to inflammatory bowel disease. The PTPN2 enzyme encoded by the PTPN2 gene acts to maintain the integrity of the intestinal epithelial barrier, thereby preventing gut bacteria from passing from the gut lumen into the bloodstream.

Given that the ‘G’ allele is linked to reduced PTPN2 enzyme activity and levels, it is possible that ‘G’-allele carriers can less effectively maintain the integrity of the intestinal epithelial barrier. This makes it more permeable and more easily penetrable to gut bacteria. When gut bacteria penetrate into the lamina propria (the layer underneath the intestinal epithelial barrier), they then activate immune cells and trigger gut inflammation.

Another feature of IBD seems to be dysbiosis – an imbalance in the types of bacteria and other microorganisms colonising the gut and making up the gut microbiota. Evidence suggests that people with IBD have a reduced diversity of organisms in their gut, with a lower proportion of beneficial gut bacteria, and a greater proportion of potentially harmful bacteria. These negative changes in gut microbiota composition are thought to promote inflammation.

As the PTPN2 enzyme also plays a role in regulating the composition of gut microbiota, it is possible that reduced PTPN2 activity in ‘G’-allele carriers may lead to dysbiosis, thereby increasing susceptibility to IBD. Some studies do suggest that the ‘G’-allele is linked to dysbiosis, as we’ll elaborate on in the following section.

Studies suggest that ‘G’ allele of the PTPN2 gene may promote negative changes to gut microbiota composition (dybiosis), such as a reduced diversity of bacteria, lower proportions of beneficial bacteria, and a greater proportion of potentially harmful bacteria.

In one study of Swiss patients with IBD, subjects were genotyped and their gut microbiota composition analysed using mucosal samples from the intestine. Compared to non-carriers, subjects with Crohn’s disease with one copy of the ‘G’ risk allele were found to have a higher relative abundances of Clostridiales and Lachnospiraceae bacteria.

How do PTPN2 gene variants affect response to spermidine?

Spermidine is a naturally-occurring polyamine found in all living cells and is present in all plant-derived foods. This nutrient has received recent interest as it seems to promote autophagy – the renewal and recycling of damaged cells. Spermidine also has been shown to have anti-inflammatory effects in the body, with studies suggesting it may reduce gut inflammation.

On this note, spermidine applied to intestinal epithelial cells has been shown to enhance PTPN2 enzyme activity, suppress the production of pro-inflammatory cytokines, and inhibit inflammatory pathways in the gut.  Furthermore, it appears that this activation of PTPN2 and suppression of inflammation by spermidine is greater in cells obtained from ‘G’-allele carriers.

Your PTPN2 and gut health trait

Your PTPN2 and gut health trait looks at your gut inflammation risk based on variants of your PTPN2 gene created by the rs1893217 SNP. Depending on your DNA results, you will be classified into one of three groups: