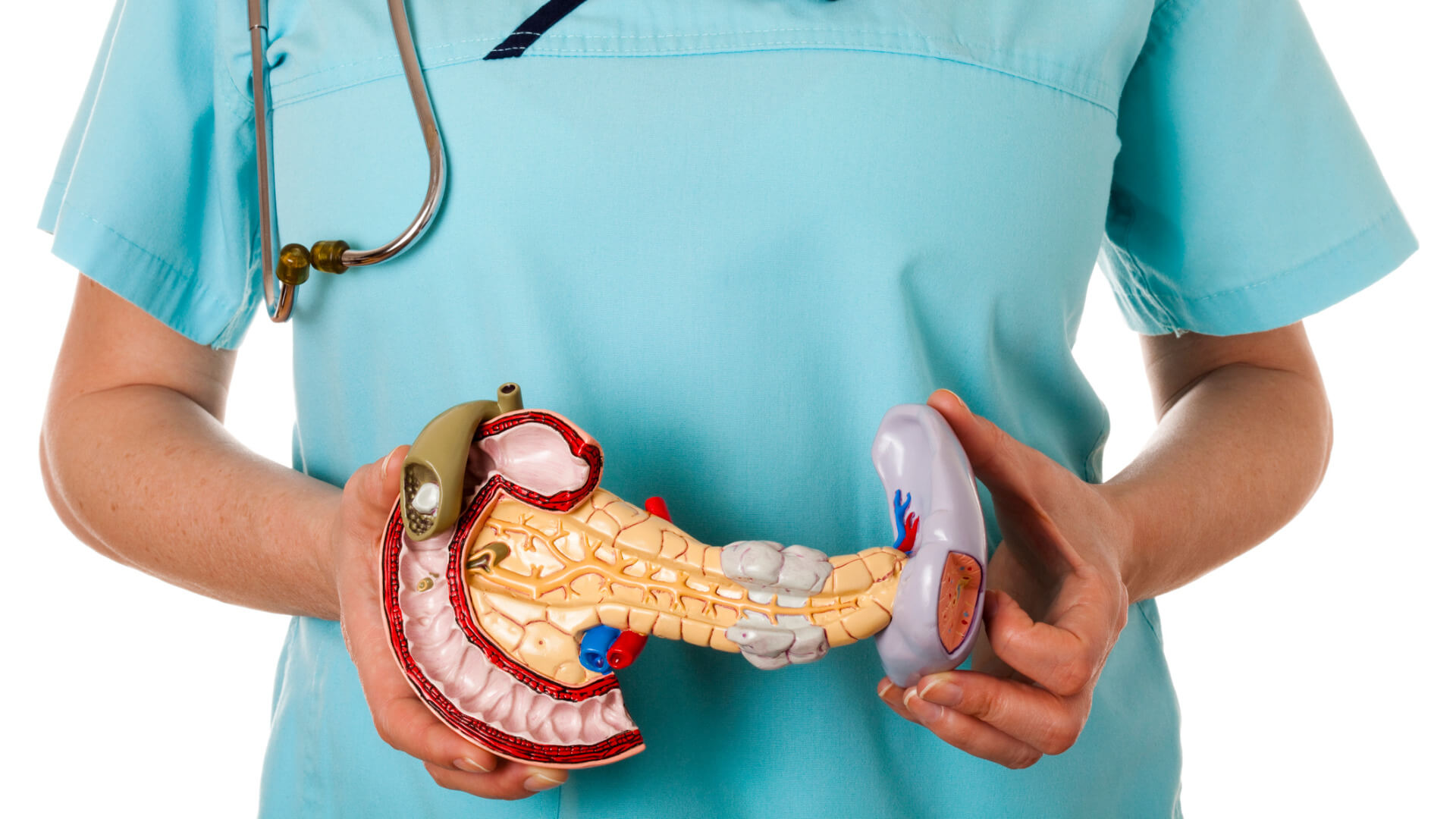 Insulin is a hormone that allows cells to take up sugar (glucose) from the bloodstream.

One popular analogy is that insulin acts as a key that ‘unlocks’ cells, allowing glucose to enter. When insulin (the key) binds to insulin receptors (the lock) on the surface of cells, it ‘opens up’ specialised glucose channels that allow glucose molecules to pass from the bloodstream into cells.

Cells can then use glucose for chemical energy, allowing them to fuel processes that are essential to life, such as metabolic reactions, transport of molecules, growth and cell division.

In addition to allowing cells to take up glucose from the bloodstream, insulin has various effects on carbohydrate and fat metabolism. For example, insulin stimulates the formation of fats in adipose (fat) tissue and the formation of glycogen in the liver and skeletal muscle.

You can read more about insulin and its effects in the body in the Fasting Blood Glucose trait article.

How is insulin secreted?

Insulin is secreted by specialised cells in our pancreas known as beta cells.

When glucose levels circulating in our bloodstream rise, such as after eating a meal, glucose moves into beta cells and triggers the release of stored insulin granules into the bloodstream. This process is known as glucose-stimulated insulin secretion.

Glucose-stimulated insulin release allows us to secrete insulin at the appropriate times (e.g. after eating), ensuring tissues (particularly the liver and skeletal muscle) can take up glucose and that blood glucose levels do not become too high.

Beta cells in the pancreas have glucose transport channels, known as GLUT2 proteins, on their surface. When levels of glucose rise in the bloodstream, glucose enters beta cells via these GLUT2 channels.

Glucose is then used to generate ATP – the chemical energy currency of cells that is produced via cell respiration. The rise in ATP inside beta cells then activates specialised potassium ion channels, known as KATP channels. Activation of KATP channels causes them to close, meaning potassium ions cannot move out of beta cells.

As potassium ions are charged particles, the efflux of potassium ions out of beta cells causes depolarisation, which opens voltage-gated calcium channels. This allows calcium to enter beta cells, which triggers the release of insulin form stored insulin granules into the bloodstream.

What happens if insulin secretion is impaired?

Problems with the function, size, or number of beta cells in the pancreas can impair the secretion of insulin. This, in turn, can lead to high blood sugar (glucose) levels.

Recall that the principal effect of insulin is to open up glucose channels so that glucose in the bloodstream can move into and be used by tissues. If inadequate amounts of insulin are being secreted by beta cells in the pancreas, glucose will linger in the bloodstream and be unable to be used by tissues. This gives rise to high blood sugar levels.

As mentioned in the Fasting Blood Glucose trait article, high levels of glucose in the bloodstream over a long period can damage blood vessels, nerves, and other organs by producing harmful molecules known as Advanced Glycation End Products (AGEs). Damage to blood vessels and organs such as the kidneys can, in turn, elevate blood pressure and increase the risk of cardiovascular disease.

In Type I diabetes, the body’s immune system attacks and destroys beta cells in the pancreas. This results in a severely reduced ability to secrete insulin. As such, people with Type I diabetes typically require insulin replacement, either via injections or an insulin pump implanted under the skin.

Type II diabetes, which is a much more common condition than Type I diabetes, is also linked to impairments in insulin secretion. In Type II diabetes, tissues such as the liver, skeletal muscle, and adipose (fat) tissue become less sensitive to effects of insulin. This is known as insulin resistance. Lots of factors can cause insulin resistance, including being overweight, a diet high in processed carbohydrates, and physical inactivity.

As tissues become resistant to insulin, the pancreas attempts to compensate by ramping up secretion of insulin. As beta cells have to work extra hard to secrete more and more insulin, they eventually struggle to keep up with demand. This causes them to become exhausted and shut down (a phenomenon known as beta cell dysfunction), thereby reducing secretion of insulin.

What is the KCNJ11 gene?

The KCNJ11 gene plays a key role in insulin secretion.

It encodes a subunit of the KATP channel (ATP-sensitive potassium ion channel), which is expressed on the surface of beta cells in the pancreas. As mentioned in the How is insulin secreted? section above, KATP channels help to stimulate the release of insulin in response to entry of glucose into beta cells.

When glucose enters beta cells, it is converted into ATP, which causes KATP channels to close. This then eventually triggers the release of insulin into the bloodstream.

Studies suggest that variants of the KCNJ11 gene can affect the function of the KATP channel and thereby impact the secretion of insulin.

Certain variants of the KCNJ11 gene have been linked to impaired insulin secretion.

A SNP (Single Nucleotide Polymorphism), denoted rs5219, causes a G to A change in the DNA code of the KCNJ11 gene. This results in substitution of the amino acid lysine for glutamic acid in the protein chain of the resultant KATP channel.

Consequently, people who inherit the ‘A’ allele (rs5219) of the KCNJ11 may have slightly impaired insulin secretion compared to non-carriers.

In one study, researchers compared the KCNJ11 genotypes of 433 Korean men and assessed their alcohol consumption as well as their insulin secretion over 12 years. Insulin secretion was assessed by calculating a figure known as the 60-min Insulinogenic Index (IGI60). This measures the ratio of insulin to glucose 60 minutes after an oral dose of glucose. Impaired secretion of insulin would result in a lower ratio of insulin to glucose in the bloodstream, leading to a lower IGI60 score.

The researchers found that compared to never-drinkers (i.e. people who did not consume alcohol over 12 years), drinkers had poorer insulin secretion as reflected by lower IGI60 scores. This effect was more pronounced in subjects who carried the ‘A’ allele of the KCNJ11 genotype, suggesting that consuming alcohol can impair insulin secretion to a greater extent in ‘A’ allele carriers.

The ‘A’ allele (rs5219) of the KCJN11 gene has been associated with a greater risk of Type II diabetes.

Studies which look at the relationship between common gene variants and a disease typically involve splitting people into two groups: cases with the disease of interest and healthy controls. Researchers then analyse genes of interest and assess whether a particular gene variant or genotype is overrepresented in the cases vs controls.

Using this methodology, a 2018 meta-analysis, encompassing 21,464 subjects, found that the ‘A’ allele was linked to a 1.17 times greater odds of Type II diabetes compared to the ‘G’ allele. This association, as illustrated in the Forest plot below, was significant in Caucasian and East Asian cohorts, but not in Indian and North African cohorts.

The reasons for these apparent differences between ethnic groups are not well understood, and may be due to differences in study design, gene frequency, other linked genes, and cultural/environmental factors.

A 2014 meta-analysis found that those with one copy of the ‘A’ allele (i.e. AG genotype) had a 1.09 times greater odds of Type II diabetes compared to those with the no copies (i.e. the GG genotype).

The reasons for an increased risk of Type II diabetes in ‘A’ allele carriers may be due to poorer insulin secretion. As explained in the previous section, the ‘A’ allele of the KCJN11 gene codes for a KATP channel that is less sensitive to ATP, thereby causing reduced secretion of insulin from pancreatic beta cells in response to rises in blood glucose.

Impairments in insulin secretion can begin years before the diagnosis of Type II diabetes, so it is possible that the ‘A’ allele confers susceptibility to this development process. It is important to note, however, that Type II diabetes is a complex, polygenic disorder – meaning it is underpinned by several genes (each with a typically small effect) and lifestyle factors.

Lifestyle factors such as physical inactivity, high amounts of body fat (particularly visceral fat), and unhealthy diet have a more significant effect on diabetic risk compared to inheriting the ‘A’ allele of the KCJN11 gene alone.

Your Improving insulin secretion (KCJN11) trait looks at variants of the KCJN11 gene based on the rs5219 SNP. Depending on your DNA results, you will be classified into one of three groups: