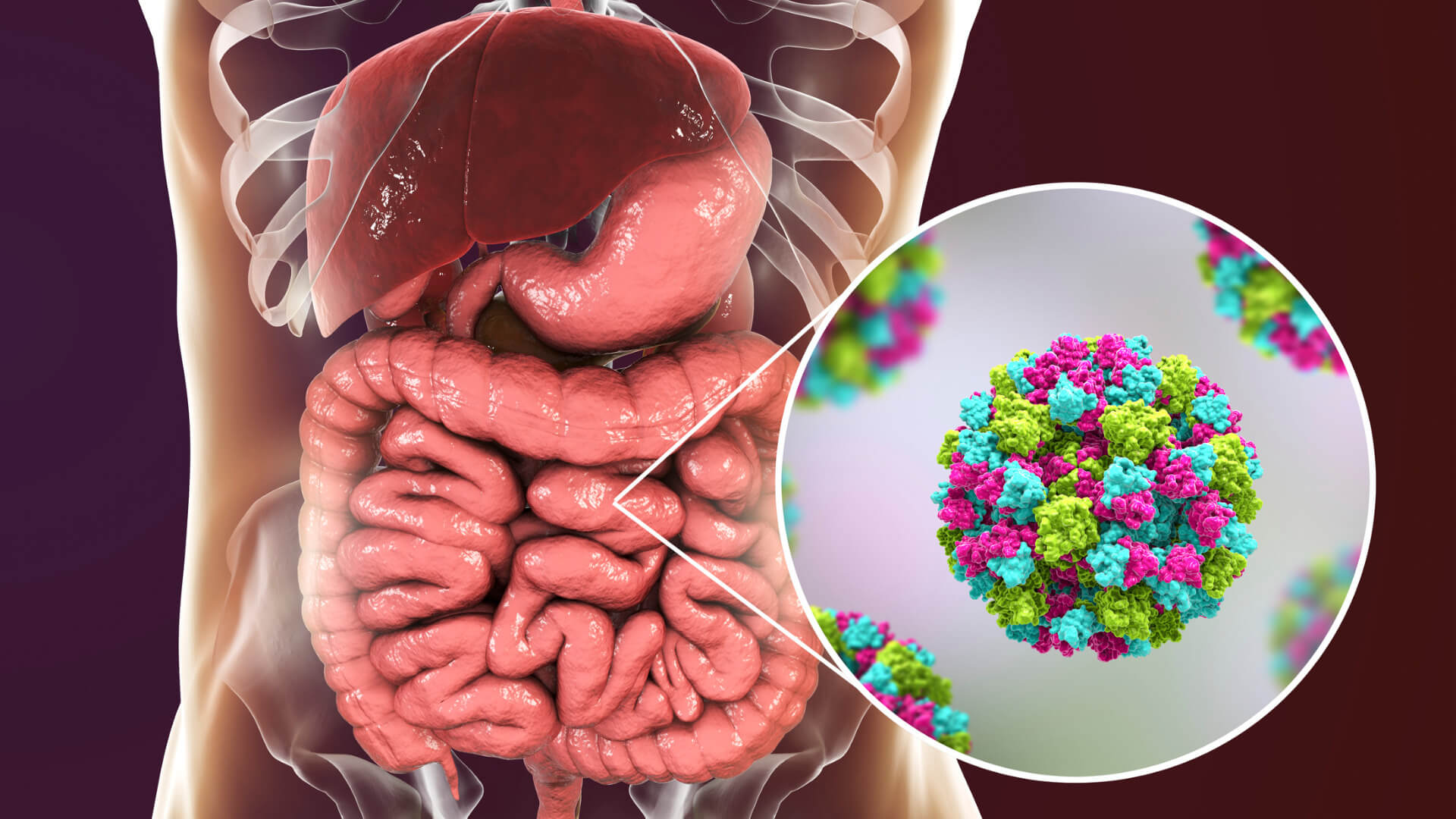 Norovirus is a very contagious virus that causes vomiting and diarrhoea. As such, it is often called the “vomiting bug” or “winter vomiting bug.”

You may have heard of norovirus outbreaks in hospitals, care homes, and cruise ships. These outbreaks occur because the virus is easily spread through close contact with an infected person, and through contaminated foods and surfaces. As a demonstration of how contagious norovirus is: it has been shown that exposure to fewer than 10 virus particles (virions) is sufficient to cause illness in 50% of those exposed.

Norovirus (previously known as Norwalk virus) particles infect the gut lining and cause inflammation of the stomach and intestines, a condition known as is gastroenteritis.

Symptoms of norovirus gastroenteritis include:

These symptoms are typically short-lived, lasting from 24-72 hours. Symptoms usually develop 24-48 hours after exposure to the virus (e.g. from close contact with an infected individual, or from eating contaminated food).

In the majority of cases, healthy people with norovirus infection recover spontaneously with rest, fluids, and electrolytes, and do not need any specific medication or treatment. Children and the elderly may be more vulnerable to dehydration caused by vomiting and diarrhoea.

Interestingly, as we’ll explore in this trait, some people appear to be resistant or less susceptible to norovirus infection.

How do noroviruses infect the gut?

As viruses lack the machinery to replicate themselves, they must infect host cells and hijack host cell enzymes and organelles in order to survive and make copies of themselves.

In this respect, noroviruses need to bind to and enter human cells in the gut lining. They do this (at least in part) by binding to HBGAs (histoblood group antigens) on the surface of cells and in mucus lining our gut.

Histoblood group antigens (HBGAs), as their name suggests, are the sugars on the surface of our red blood cells that determine our blood group/type.

As you are probably already aware, you can have one of four main blood types: A, B, AB, and O. These blood types arise from what HBGAs your red blood cells produce on their surface: A, B, or O (also known as H).

It is not just red blood cells that express HBGAs on their surface, other cells do so too. This includes epithelial cells that line our gastrointestinal tract (gut). Furthermore, depending on whether or not we’re a secretor (explained in the following section), we secrete HBGAs into bodily fluids, including sweat, saliva, and mucus that lines our gut.

Studies suggest that noroviruses bind to HBGAs in gut mucus and on the surface of intestinal epithelial cells. In particular, the protein shell of norovirus particles has a protein (known as VP1) which allows it to attach to HBGAs on human cells.

After attaching to a HBGA, a norovirus particle is able to enter inside a gut lining cell. Once inside, the virus disassembles and uses human cell machinery to copy its genetic material (RNA). This genetic material contains instructions for making new viral proteins, which are also made by hijacking human protein-making machinery. The new viral proteins are then formed into new virus particles that are released from the gut lining cell and go on to infect other intestinal cells.

By entering and infecting intestinal cells, norovirus particles cause cell damage and trigger an inflammatory response in the gut. Microscopic studies show that norovirus infection causes damage to microvilli – the tiny hairlike projections on the surface of intestinal cells that allow the absorption of nutrients. The triggering of an inflammatory response also causes intestinal lining cells to become more leaky, leading to loss of fluid and ions, which results in diarrhoea.

What is secretor status?

Your secretor status simply refers to whether you secrete histoblood group antigens (HBGAs) in bodily fluids such as sweat, saliva, gut mucus etc.

Secretors, who make up roughly 80% of the population (although this varies by ethnicity), do secrete HBGAs (i.e. either the A, B, or H (O) antigens) into bodily fluids. The gut mucus and intestinal epithelial cells of secretors will therefore contain HBGAs.

By contrast, non-secretors, who constitute about 20% of various populations, do not secrete HBGAs in bodily fluids. Non-secretors will not have HBGAs in their gut mucus or on the surface of intestinal epithelial cells that make up the gut lining.

As we’ll describe shortly, this difference in expression of HBGAs in the gut affects susceptibility to norovirus infection.

It’s worth pointing out here that your secretor status no effect on your blood group / type. This is because the genes that determine what HBGAs your red blood cells express on their surface (i.e. A, B, or H (O) antigens) are different to the genes that affect whether or not you express these antigens on other cells and secrete them into bodily fluids.

You can read more about secretor status and how it affects vitamin B12 absorption in your Vitamin B12 Absorption trait.

How do genes affect secretor status?

Your secretor status is determined by what variants of the FUT2 gene you inherit.

This gene encodes an enzyme called alpha-1,2-fucosyltransferase, which helps to produce HBGAs on the surface of gut lining cells and in bodily fluids such as gut mucus. (Specifically, the enzyme is needed to make the ‘H’ antigen, which then undergoes further reactions to make the ‘A’ and ‘B’ antigens).

Variants of the FUT2 gene can affect the function of the alpha-1,2-fucosyltransferase enzyme, which, in turn, affects how effectively you produce and secrete HBGAs. On this note, a SNP (Single Nucleotide Polymorphism) within the FUT2 gene, designated rs601338, causes a G --> A change in the DNA code. This gives rise to two different gene variants or ‘alleles’ – the ‘G’ allele and the ‘A’ allele.

People who inherit the ‘G’ allele produce a normal alpha-1,2-fucosyltransferase enzyme and therefore produce HBGAs on the surface of gut lining cells and in gut mucus. ‘G’ allele carriers (i.e. those with the GG and GA genotypes) are therefore secretors.

By contrast, inheriting two copies of the ‘A’ allele results in the production of a non-functional alpha-1,2-fucosyltransferase enzyme. This means those with two ‘A’ alleles (i.e. the AA genotype) do not produce HBGAs on their gut lining or in gut mucus. These individuals are non-secretors.

As we’ll explore in the next section, non-secretors (i.e. those with the AA FUT2 genotype) are shown to be resistant to norovirus infection.

Other SNPs in the FUT2 gene can also affect whether you’re a secretor or non-secretor. In Asian populations, for example, the rs1047781 SNP is a strong determinant of secretor status.

How do your FUT2 genotype and secretor status affect susceptibility to norovirus infection?

Non-secretors are widely shown to be more resistant to norovirus infection compared to secretors.

One of the first studies to show this was a “challenge” study conducted in 1977, when 12 volunteers were deliberately infected with norovirus and then followed up over time. Interestingly, half of the volunteers did not develop nausea, vomiting, diarrhoea or other symptoms of norovirus infection. These people also remained asymptomatic after being given further doses of norovirus after 27 and 42 months.

Subsequent challenge studies found that this subset of people who appeared to resistant to norovirus infection were all non-secretors. Further genetic analysis showed that they did not carry the secretor ‘G’ allele (or corresponding allele for other SNPs) of the FUT2 gene.

By contrast, secretors who carried the ‘G’ allele were found to be susceptible to norovirus infection and much more likely to develop symptoms of norovirus gastroenteritis.

A potential criticism of challenge studies (whereby subjects are deliberately given doses of norovirus) is that they have tended to use a particular strain or “genotype” of norovirus, known as GI.1. In reality, the majority of norovirus outbreaks in the world are due to a different group of virus strains, the GII.4 genotypes.

Various studies of GII.4 norovirus outbreaks in hospitals, military barracks, nursing homes, and schools across the world, however, also reveal that non-secretors are much less susceptible to norovirus infection.

Broadly speaking, these studies look at outbreaks and classify people into cases – those with norovirus infection, and controls – those people who were exposed to the virus but were not infected. The researchers then assess subjects’ secretor status and FUT2 genotype and analyse whether being a secretor (and carrying the ‘G’ allele (rs601338) of the FUT2 gene) is associated with a greater or lower odds of being an infected case compared to being a non-secretor (and having the AA FUT2 genotype).

Using this methodology, several studies of outbreaks have found non-secretors to be significantly less likely to be infected with norovirus compared to secretors. A 2021 meta-analysis, which pooled the data from 20 individual studies, found that non-secretors were about 3 times more likely to be a non-infected control compared to secretors. This is illustrated in the Forest plot above.

Another meta-analysis conducted in 2016 reported similar findings. Non-secretors were roughly 4.2 times less likely to be infected with norovirus compared to secretors. When the analysis was restricted to GII.4 norovirus strains (the strains responsible for most norovirus outbreaks across the world), it was found that non-secretors were 9.9 times less susceptible to infection. These results are shown in the Forest plot above.

Why are non-secretors less susceptible to norovirus infection?

As explained in the previous section, both challenge studies and analysis of outbreaks show that non-secretors with the AA (rs601338) FUT2 genotype are resistant to norovirus infection.

These studies show that non-secretors are less susceptible to both symptomatic and asymptomatic infection, suggesting that non-secretor status prevents the gut from becoming colonised with norovirus in the first place, rather than merely reducing symptoms.

As described in the “How do noroviruses infect the gut?” section, norovirus particles enter and infect intestinal epithelial cells that line the gut by binding to HBGAs (histoblood group antigens) on their surface.

Non-secretors, however, do not express HBGAs on the surface of intestinal epithelial cells or in overlying gut mucus. This is because non-secretors have FUT2 variants that render them unable to produce HBGAs on intestinal cells and secrete HBGAs into bodily fluids.

The lack of viable HBGAs in non-secretors means that noroviruses particles cannot bind to and enter intestinal epithelial cells. This makes non-secretors much less susceptible to norovirus infection (as well as other pathogens, such as rotavirus).

Depending on your DNA results, you will be classified into one of two groups: